I love riding with my partner and riding by tandem is one of my favorite ways to get around on a Sunday. Touring by tandem is literally twice as fun as riding solo,when you are on a bike with the one you love and the one that loves you. But tandem bikes are rare and excellent electric tandem bikes are even rarer, so I wanted to give you a fresh impression of our ride yesterday on the 2018 MOUSTACHE Samedi 27 X2 tandem. 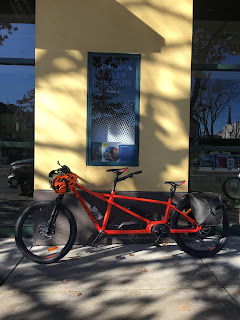 Moustache is a French company, making some of the most innovative ebikes in the world. Their tandem is no exception. This bike comes in two build types, either a smooth tire touring type or a knobby tire off-road type, but the frames, motors and other specs are pretty much the same.

I've ridden tandems for the past few years on road and off road. Yesterday we did a Meet-Up ride with other fellow ebikers in the Sonoma area. Naturally we were the only tandem riders, with others riding solo on their Haibikes, KTM, Giant, Felt and Blix bikes.

Out and about in wine country, Tandems are wonderful. Before our meet-up we scouted around Sonoma for breakfast downtown. The tandem is easy to get on and get going. With the Bosch motor, starting off is nicer than without a motor, as you often need a little oomph to get momentum on a tandem. 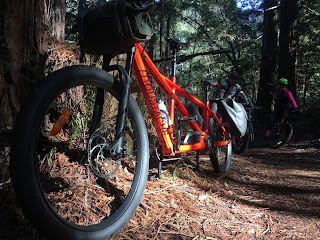 What you notice immediately on the Samedi 2X is its wide handle bars and forward riding position. The bike is made for adventure touring on or off road with MTB type bars front and rear. Big Magura brakes also help. You also notice the sturdy Rockshox forks which smooth out the ride for potholes on road and rocks and ruts off road. The rear passenger also gets a nice Suntour suspension seat post to numb out the jerks. Both of these parts work together to even out the long frame geometry and make the bike very ridable in all riding conditions.

I am 6 foot 1 and at first my cockpit seemed short at first ride. Visually, when you look at the bike it appears that way too, but once on the bike I got used to the geometry and felt the short cockpit was working to my advantage in other ways, I just don't know how. 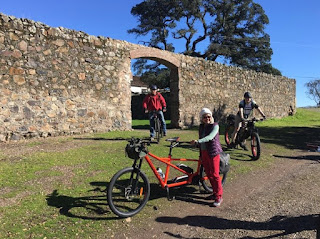 My partner is 5 foot 1 and she didn't complain about size much on this bike. We did have the seat too high for her at one point but lowered it and found a good balance after a few hours of riding with her not able to touch the ground when we stopped. Normally the seats are a problem on a performance bike but neither of us felt them to be too hard even after a full day in the saddle. 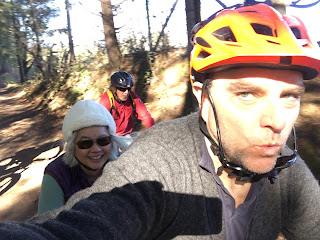 And ride we did, we literally spent the whole day with just a few stops on the Moustache Tandem, riding from 9AM to 5PM all over Sonoma on roads and trails, in the bike lane and in bike dirt paths.

The handle bars are quite wide, so riding on the bike paths was precarious at times as we passed through the guard zones. Our first challenge after breakfast was to climb up to the top of Sonoma Overlook trail which takes you out of town and straight up the mountain above Sonoma. This was a climbing test for the bike and it was grueling even with the Bosch motor.

As this was our first time out on the bike long term and we were about to embark on a 50 mile ride in all kinds of condition, I didn't want to do anything early on that would spend out our batteries, so we climbed up half way only, but it was enough to see that we could climb fine at 10-15 miles / hour up a very steep grade. By the end of the day, I had so much battery left, that I could have easily kept climbing to the top of Overlook Trail and had gobs of battery left for the rest of the tour. I wish I had too, as the view up at the top of the trail must be wonderful. We'll have to revisit it again next year during Spring time.

Riding around Sonoma on a crisp January morning with everything green and wet felt wonderful. Sonoma is just recovering from some nasty wild fires and we could see most of the mountainside all burned up. Must have been terrifying to be in the area during the fires. Still, the grasses were all back and flowers were already starting to bloom even though it was late January and quite cold.

After meeting up with the group, we first jumped in to the Sonoma Art Museum to check out the Jack London exhibit going on there. I'm a big fan of Jack London and his adventures. Our ride was themed for him and our route was to ride from Sonoma downtown to Jack London State Park where we'd find the trails and make our way up to the summit of the park. 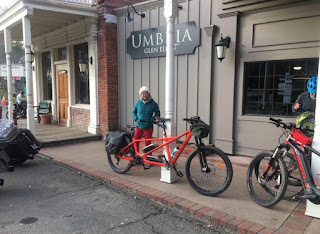 The ride from Sonoma to Glen Ellen is all on roads with some shoulder and painted off bike lane. It's mostly flat and we cruised at 18MPH most of the way through wine country. The Samedi Tandem accelerates great. In fact, though my friend Frankie thought that Moustache should have offered a different gearing configuration, I found the gearing to be just perfect for all conditions we met that day. It got up to speed fine. It climbed steep stuff fine and it cruised fine. I don't think I'd change out the front sprocket.

Moustache makes the Tandem in both a touring and an off-road version. We were on the Touring version which is identical to the off-road with the exception of cruiser tires, a rear rack, a rear fender and lights. Both come with big dual 500W Bosch batteries. Truth be told, we should have been on the off-road variety this day, as the route called for some serious trail work and it turned out to be muddy and rocky.

My partner and I enjoy adventure. We road a tandem over the San Juan Bautista Anza Historic Trail recently without a motor all the way to Salinas from San Juan Bautista and back. The Moustache would have faired even better with a quicker ascent and a better ride once we got back on road.

The Trekking bike is a better bike if you plan to tour long distance and want to have the option to go both on and off-road, but tour fast on road.

In it's trekking form, this bike did great off-road. Jack London State Park has some pretty good trails. The main trail is a biking/hiking/horse path that winds up the summit past redwoods, a lake that Jack built for fishing and swimming and through many creeks and washes. It is well maintained by the locals and volunteers with lots repair work where the trail washes out. To the locals, this is their back yard play ground and everything done is in the spirit of the wild adventurer Jack London. To me, this park is a spiritual pilgrimage destination to any one who enjoys the outdoors unfettered by the safety of civilization.

Once you get past the lake and head up aways, the trail gets steep and rocky. It's 2300 feet to the top. A bit further up, you'll see a camp set in some old redwoods. This is the spot London often camped out with his crew. From here, the trail gets very challenging. I've led groups on this trail before but not by tandem so we made it up.

My partner and I gave it our best shot to get as high as we could up the mountain. At one point she had to get off and walk as the path was steep, wet and slippery. Without knobbies the back wheel was slipping. It actually slipped more without her on the bike but once we got to a flat area she climbed back on and road a few more hundred feet until we came to a vey rocky, very muddy, very washed out area that I had to push the tandem up using walk assist from Bosch. Even with that I realized that this was pretty much our turnaround point, I expect we were about 2/3 ways up. We let the rest of the riders go on ahead.

With knobbies and more commitment we could have made it all the way, but neither of felt like pushing things today and we turned back to enjoy the down hill. On the way down we got to test out the big Magura brakes, pretty much cooking them the whole way. Going down even in mud, our Super Moto X tires held grip great come to think of it. As much as we need a good system for climbing on a bike like this we need even better brakes to make sure we get down safely. 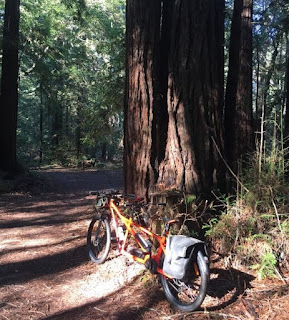 I love the Moustache Tandem! My stoker partner loves it too, so much so she wants to trade in her own Felt hybrid ebike for a Moustache tandem and let it be our main touring ebike, since we are usually riding together always anyway. As a couples option, the tandem just can't be beat. It is just the best way to tour as a couple. You get to ride together, you get to divide some of the navigation and of course the pedaling power. With a motor and 2 batteries it gets even better. On a tandem you're already blowing out the weight issue, so you're heavy. Adding a motor and batteries doesn't change much to the equation.

I joked with her when she talked a little too much about my riding choices along the way that I wished the bike had an emergency un-coupling that allowed us to disconnect while riding, but other than that the features of the Samedi Tandem are great.

In the steep steep climbs, I wonder about chain life on a bike with this much riding on the chain. I think an upgrade soon to the SRAM EX1 system will be in order for a better chain and gear life. I'm also working on finding the best pannier and touring back setup for this ride, now that I know I can ride for miles and miles on this tandem. After a full day of riding we barely made a dent in the range of the batteries with only one notch down on the battery indicator.

Think about the distance you can cover on a bike that also rolls fine with the motor off. The rolling resistance of this bike is nearly zero. It rides fine with the motor off on flat terrain and basically you can use the eco mode of the Bosch system to get you to your cruising speed quicker and then just pedal to keep it up at speed, so you're only using your battery for climbing.

Any down sides to it? Little stuff like the grips. They are meant to be used with gloves, which I didn't bring this day. At this price point on a touring bike, I'd prefer to have some Supernova lights already built into the bike. It only has one water bottle mount. This bike is meant to eat up tons of adventure miles and so I'd want mounts all over the place for it. After yesterday's muddy ride I'm also going to be putting on a front mud fender and changing out the Ostrich bar bag for an Ortlieb bike camping bar bag. Just fantastic.

I'll end there. I just fell in love with the Moustache, which I really wasn't sure about at first. The bike rides like a dream but mostly it's got me dreaming of all the amazing places we are now hoping to go as a couple with this bike.