A couple months ago, the "ebike every one is talking about" shipped out to would-be owners following its much ballyhoo'd Indiegogo launch. A few days later we started to get Sonders bikes in our store for assembly and so we got to know the bike first hand and then we made a video about it. The video showed the Sonders bike and a more expensive bike and basically said that the more expensive bike was a better investment and that the Sonders bike should cost more but it relied on the hype of its Indiegogo campaign to keep the cost down to nearly zero and therefore come to market without all the added baggage that a more expensive bike might have (customer service, distribution, quality, professional service assembly, post-sale support). Sonders consumers hated the video and trashed us on forums and in the video's comments, as if we had spat on their deity. It was so bad and so constant, we had to turn off the comments. 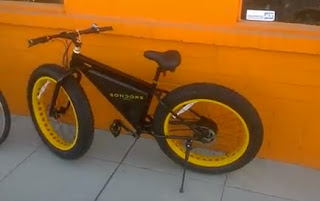 The Sonders ebike launched with a fancy claim of basically being "FREE", or next to it, and it quickly became one of the most popular Indiegogo campaigns ever. "FREE" is always popular, as is next to free and the Sonders prices out as basically free, or, if you will, a nearly no-risk purchase for any one thinking about getting an e-bike. Because, you see, a real e-bike costs real money. The Sonders just isn't real and that makes it popular.

The best thing about the Sonders e-bike was that all of a sudden, people who thought they never could afford an e-bike - because they knew a real e-bike costs real money, that they didn't have ($2,000, etc.) - could now conceivably afford one. And, even those who could afford one but just couldn't justify spending $2,000 on a real e-bike, could justify blowing $500 on something that, even if it didn't work, would be like purchasing a collectors piece, like the first ipad, or Google Glass. The Sonders bike is more about a movement, not a an e-bike. After all, e-bikes are the "latest craze" on the Internet, according to authorities like Yahoo and some blogs.

Most of the people we met - 7 in total - who plunked down their hard earned credits on this bike seemed to be out of shape tech men who didn't want to buy a bike, didn't want to buy an e-bike and didn't want to go into a store and talk about bikes or ebikes. Buying an ebike for this tech crowd, who haven't been on an bicycle since they were a kid, was quite possibly an embarrassing concept. MOre embarrassing than the risk of wasting $500 in cool and much talked about Indiegogo campaign. When you contribute to an Indiegogo campaign after all, you're not just a customer, you're an investor. (ensuring that you would be waiving all general rights or expectations as customer / consumer)

A Fortune Magazine writer even bought one! Read about it here:

My response to this article is here:

Rick- Hopefully your bike is still working after your two weeks... The ones we have coming into our store for repair aren't and it's hard to get tech support from a company with no phone number posted on their web site. Perhaps there is a post-sale support package they offer.. Customer service comes at a cost, as does quality, distribution network, etc. and you wouldn't be writing about this bike had you paid $1500 or $2000 for it, which is what it would cost had it not relied on Indiegogo internet hype for it's marketing and distribution. Let's hear about a long term review in a year. It only cost $500 so we shouldn't expect it to last much longer than a few weeks, right? E-bikes are not a new thing. Neither are poor quality e-bikes. The reality is that they are more expensive than most people can afford or would care to spend, which made this bike seem like a great deal and why you thought you could blow $500 on a potentially useless investment and it made for some great content in your tech article any way. Like many, you bought not a bike but the hype surrounding it and hype is priceless right?

Of course, being a writer for Fortune magazine, Rick more than likely got to expense his Sonders purchase as a business expense, so his stake in the game is even more than nearly free - it IS free. One can only imagine how much Federal Tax revenue was lost out to this program....

So, now months later after the ebikes' launch, we have our first broken Sonders in the store.... 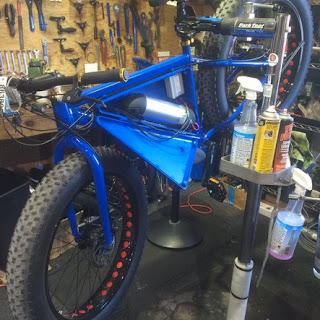 As an e-bike store, we often speak with customers who own low-grade e-bikes bought on the internet that do not have any type of support infrastructure ( customer service, spare parts, local national contact office) attached to it. They are typically throw away e-bikes and every one knows this. We have been selling and servicing e-bikes for years and so we get everything from the Lee Iacocca ebikes, to odd Chinese e-scooters with pedals bolted on them to make them look like e-bikes, to full blown kit contraptions on crappy beach cruisers owned by grumpy old men living the DUI dream of a car-less lifestyle.

In those cases we and the owner shrug our shoulders. It's a $500 product. To try to even diagnose the problem will take time and that comes at a cost. To then source or fix parts comes at a cost. The cost of the service far out weighs the cost of the parts that the bike needs, but since you can't get them because their no entity behind the product, there's no sense in trying to fix the bike.

The owner of this ebike has had it all of a week. He's able to communicate with the entity behind the company by email only. They have sent him a spare part to attempt to fix it. The part did not fix it. He now has brought it to us to try to fix it further and the costs associated with trying to fix it quickly outweigh the low initial cost that was put out in the original online purchase. At $500, it's like trying to fix a hair dryer. Who does that?

The owner of this bike "had been thinking about getting an ebike, read the stuff about Sonders online, read the hype about it and without much thought, put down his credit card". He's said he may get another one some day. Who knows. After the first experience costing him time and money he may just go back to driving a car or riding a regular bike.

Our basic position on this hype e-bike remains the same - it has achieved its low price through a combination of low quality parts and design and a distribution strategy based on internet hype, lacking any of the expensive infrastructure needed to bring a quality product to market.