Stromer ST1 Platinum - The Solution For The Common Commute

What do you do if you have the perfect high paying tech job in the city and the perfect home in the suburbs, but the two are joined by a commute from hell? The Stromer ST1 Platinum e-bike could be the answer to your problems.

In most metro areas of the United States, public transportation systems are poorly designed patchworks of multiple systems stitched together by disconnected lines, creating awful, sluggish, out-dated transportation options that force too many people simply endure the nightmares of congested traffic and over priced parking.

There's a solution that bypasses all of that and even gets you to work feeling refreshed and energised from a work out.

The Stromer ST1 Platinum is fast, traveling 30MPH with a pedal assist motor.

The ST1 Platinum has a range of appx 30 miles.

The Stromer is increasingly seen as a viable option for consumers looking to upgrade their lives, decrease the time they spend stuck in traffic while still getting the body moving.

Motostrano has been selling the Stromer models for 3 years now. Designed in Switzerland - the Swiss have a large base of e-bike travelers due. E-bikes are a great solution for areas where there are hills, as well as traffic. The more time we can spend out of a car, the better we all are. 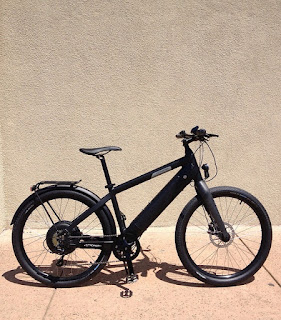 The Stromer ST1 differs from previous models in that it's pedal assist only. The Previous model had a POD Power On Demand option, as well as a suspension front fork, 2 things we like about the earlier model. But the added speed of the ST1 Platinum makes up for the lack of POD and suspension.

One of the best assets of the ST1, however, is that it's a serviceable bicycle, as well as a high-tech mode of transportation. Many ebike companies are fly-by nite operations who utilize proprietary components for most of the assets of the bike. 90% of the Stromer is standard bike stuff. The e-bike aspects of the bike, if there is ever a problem are easily replaceable in case of failure.