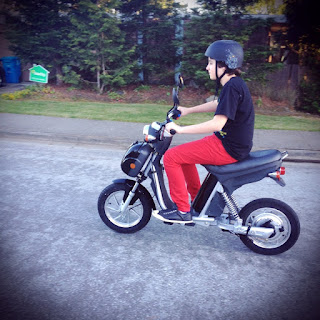 You arrive silently. You startle pedestrians on the sidewalk in an entirely different way that a barreling Harley bombing down a silent suburban neighborhood might. You appear out of no where.

You are a little invisible, unknown. In disguise.

One of the bike brands we took on over at motostrano on a few months ago was the electric scooter/bike hybrid, the FlyKly. Not so much on purpose, mind you. The Flykly came to us when the company's owner contacted us seeking help for a local warranty job for a local customer of theirs who had some technical problems with a recently purchased bike and needed help. Due to our electric bicycle expertise and our general good-guyedness (excellent reputation), or maybe it was our dumb willingness to tinker around on something entirely foreign, we were hired to fix some broken Flyklys and in the meantime, we decided to try and sell them as part of our general electric bike catalog.

We fell for them a little. They were cute, cheap and, we thought, being hired to work on them would help us get to know them while selling them.

The only problem with that idea is that the FlyKly marketing/sales strategy is primarily an online buy-direct strategy. Had we known, or realized, this at the time, the FlyKly would have remained a curiosity, but not a part of our catalog. So, in 6 months time, we haven't sold any FlyKlys, nor will we ever, because, any one can buy a Flykly bike delivered directly to their door, with free shipping, fully assembled, with no sales tax at the company's own web site for about $2000. If you buy it from us, you pay sales tax and have to lug it home.

But, in the 6 months that we tried to sell them, we have learned that they are sure not without their fair share of challenges. Ie. while we didn't get calls from prospective buyers, we did receive many calls from post-buyers looking for technical or warranty help on the bikes. The rate of issues to sales is really too high by our standards. Normally, we'd sell a few units, get a warranty question. In our case we've sold no units and worked on quite a few.

Though the FlyKly strategy is a buy-direct strategy, these bikes really need to be set-up by experienced technicians, who at least can do basic safety-checks, brake adjustments, wiring reviews and other safety-oriented things. The bikes aren't ready to ride out of the box and I would consider them unsafe at best without the standard tests that an experienced dealer might put the bike through before letting granny get on the gas and get down to the grocery store with unadjusted brakes, or wiring that's not right, or tires that aren't properly inflated.

Qith only one unit on the sales floor as a demo, our FlyKly has primarily been used as a test mule/ burrito-getter. The "vintage" model that we have, in fact, features a perfectly sized front storage compartment that will fit 2 burritos, some chips and a drink just fine.

In just a few months owning the bike and using it only sporadically as a lunchmobile, the battery did go out and FlyKly was quick to replace it, and the bike's charging unit, as a warranty repair. 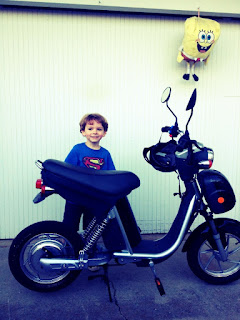 Since our one test bike has had no customer interest, at all, I decided to bring it home and give it a full long term test in my neighborhood and at least get some use out of the bugger.

The FlyKly is for the most part a scooter in disguise. It has pedals, but everything else about it is scooter. The pedals and the max 20mph speed limit mean you don't need a license, insurance or even a helmet to ride it.

Unlike a bicycle, the FlyKly allows you to ride two-up, ie. with a passenger, making the bike an excellent people shuttle.

I have 3 kids and we live multi-block hilly roads away from anywhere they have to be at all times. So, to get from A to B, it's either a long slow walk or a quick boring/pointless drive in a gas guzzler car. Our cars are a Chevy 2500 V8 truck and a ML350. The Truck is great for hauling mega tons. The ML is a great multi-state touring vehicle. Neither make any sense at all for short trips around town.

The brakes on our "vintage" model are pretty bad. Drum brakes, unlike the modern version, which now comes with disc brakes. They lunge, they surge, they are very uncontrollable. Acceleration is weak, but not unbearable. Even riding two-up, the bike will creep up to 24 mph with ease and hold it there in flat terrain.

The FlyKly loves coasting downhill and does do with grace.

Once you hit a serious incline you will need to start pedaling to assist the bike. It likes help. The bike is geared so low that you can only help it at very low speeds, just before it teeters out and stops. For very large hills, you're off the bike and walking.

The riding experience is great. One thing you learn when you ride an e-bike is that cars really suck. They are really quite awful and 90% of the time totally unnecessary. Not only are they entirely too fast and dangerous and they stink and they're ugly, but they are obnoxiously loud for no real reason and pretty much are out to kill you, always. Riding the Flykly is so nice and quiet and silent, the moment you encounter a car, you're fearing for your life and shocked by the awful sound that a car makes vs the quiet of an e-bike.

Hopping on to the FlyKly I am a little reminded of what it would be like to hop onto a Speeder in StarWars. It's elegant, fast, quiet. It's agile, yet bouncy. It zips around instead of snorts around.

Kids make you a hero when you ride around the neighborhood on a scooter. My daughter hitches a ride to school with me, riding proudly on the back with her dad, holding on for deal life, instead of lulling mindlessly in the back seat of an unnecessarily gigantic car. It's a little dicey dodging all the speeding blind-driving multi-tasking mini-van drivers in the morning, all of them waving to each other from their rolling mini-houses, as if the roadway were a social gathering instead of a transport system.

So, you are playing a constant game of dodge ball and you're often the ball. You don't have the power of a motorcycle to squirt yourself out of trouble and your size is, well, you're small on that big road with all those big cars.

Yes. It's peaceful aboard a FlyKly. It's enjoyable.

I bolted over to pick up my daughter from school the other day, dodging piggish cars along the way, all of them lined up in front of the school, loading zone taking up too much space, like a parade of elephants at the circus. One person per car, each picking up one person. Engines, radios, air conditioning. All on. Driver consciousness, off. Most of them, only to u-turn in a residential zone and drive 3 blocks back home.

A great advantage of owning a FlyKly is you can get in quick, quiet and small to any public commute area. Is your kid's school pick up zone log-jammed with a thousand mini-vans each with a lagging parent checking their email not realizing their kid is already in the car? No problem. The FlyKly gets you in between all that with a front row seat ready to pick up or drop off in complete stealth mode. You're outta there before any crosswalk duty can waive you over. Other parents and kids will look at you and think 'wow, that's pretty cool'!

Speaking of picking up and dropping off. In my neighborhood, parents really love to speed through our quiet residential area at speeds up to 3 times the posted 25 MPH limit. The stretch of road we normally take, on our street, is a particular favorite of these Momcar racers. Old ladies checking their mail, picking up the paper, folks going out for a jog, kids walking to school. Nothing seems to stop these morning racers who risk limb and life to uh, get to work.

Picking up my daughter, we said hi and my little sweetie-pie climbed on the FlyKly and took hold . It would be a couple minutes until we both realized we were together and in silence. The FlyKly is so quiet you forget you are on it. Your thoughts aren't muddled out by road noise or radio noise. So, we started to talk in the quiet hush of the wind. It was refreshing and enjoyable, making being a people shuttle, enjoyable.

You only have to wear a bicycle helmet on the Flykly. This means you can talk freely, unencumbered by bulky helmets or loud noise.

The only noise you'll notice is the obnoxious sounds of other cars. And this is a serious concern. On your electric bike you may find yourself at a 4 way intersection where you will be the most quiet thing on the road, wondering why the other vehicles sitting there doing the same thing as you need to be so GOD DAMN LOUD.

The FlyKly and electric bikes in general are robots. The gap between riding a FlyKly and sitting on R2D2 is minimal.

The FlyKly does hills in a crappy kinda way. It can handle minor inclines, even riding two-up. Increase the grade a lot and you will need to get on the pedals.

When you're on the pedals, the FlyKly takes a leap back in time a little. The small little crank arms spin freely and work with minimal push and tug, but you're pedaling rapidly to inch the bike over any crest. This is when the bike reminds me of a little futurebiopunk steam accessory. The motor is pushing, you're pushing and squeaking.

The suspension on a FlyKly is dreamy. So dreamy, me and my kids like to bounce around on it like a pogo-bike. In fact, if only we could add some power to the bike by bouncing on it, that would be ideal.

Aside from the small jaunts down to the sandwich shop, this is the first long-term study I've read of the FlyKly. So far, it's a fun, little scoot. Long term, I want to know how long the bike's battery and motor last under the stresses of daily use. I'll post updates here as things develop with this bike. So far, it's a neat little shuttle bike and I kinda a like it.