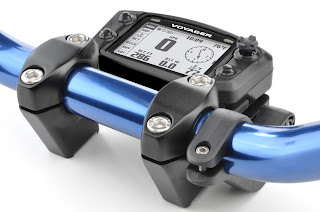 Question: Voyager kits include physical sensors, magnets, and other cables. Why does the unit need this if it’s a GPS?

Answer: You can use Voyager handheld without any sensors connected. However, physically bolting Voyager to your vehicle provides many advantages over what you are used to in a “standard” GPS.

Question: Do I really need a wheel sensor? “Standard” GPS units get along just fine without one.

Answer: All speed/distance data can be gathered from either GPS or the wheel sensor. Voyager kits provide a wheel sensor for several reasons:

Question: Can Voyager use GPX files?

GPX (the GPS Exchange Format) is a light-weight XML data format for the interchange of GPS data (waypoints, routes, and tracks) between applications and Web services on the Internet. GPX is being used by dozens of software programs and Web services for GPS data exchange, mapping, and geocaching.

Question: Does Voyager have topo maps?

Answer: On the trail, OHV (off-highway vehicle) riders do not typically utilize elevation data found on topo maps; instead, topo maps are used because of trail route information. Topo maps are mostly based on aerial photos from the 1950’s and 1960’s, so many are out of date and inaccurate. While some updated topo maps are available, the efforts to restore them focus on hiking trails, not OHV trails.

Because topo maps are not particularly well suited for use on OHV trails, Voyager provides a better means of collecting, displaying and sharing up-to-date OHV trail information. Routes may be imported into Voyager from standard GPX files, or exported for later review and sharing. Using Voyager’s trail-centric approach, riders can enjoy a superior experience using up-to-date trail maps.

You can find up-to-date trail information at Trail Tech’s OHV map website: www.OHVtrails.net. There you can plan your rides by overlaying a library of OHV trails and roads on top of detailed topographical maps and satellite images courtesy of Google Earth™. Create your own custom trail collection and upload it to your Voyager GPS dashboard. While OHVtrails.net currently covers only North America, it is being actively developed for other parts of the world. OHVtrails.net is provided free of charge for all to use.

Question: How many track points can Voyager hold?