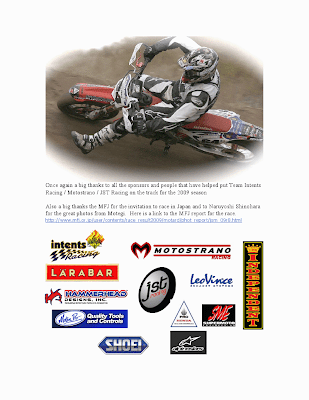 Although the AMA season had finished up at Miller Motorsports Park in Utah on Sept. 6th, Team Intents Racing / Motostrono / JST Racing was busy getting ready to send rider Travis Marks to Japan for the last MFJ supermoto race at the Motegi Twin Rings Track. With this being Travis’s first time traveling to Japan, long time sponsor John Tai from Motostrano and JST Racing head over to Japan with Travis. With the help from Saai Racing, Travis competed in the M1 class ( 450 Premier Class). The team shipped over Travis’s suspension, brakes, clutch, front wheel, tires and bars. Saai Racing had a Honda CRF 450 for Travis to use and support at the track. Travis had a great time in Japan and enjoyed racing against the riders in the MFJ M1 supermoto class. Team Intents Racing / Motostrano / JST Racing would also like to give an extra thanks to Russell at Intents Racing, Joe at Motostrano, Greg and Jeff at Alpinestar, Larabar, Chris at Motion Pro, Harry at SME, Hammerhead, Rich at X Brand Goggles, Sport Tire Services, Hart and Huntington and Superpass. Travis hopes to return next year for another race in Japan.