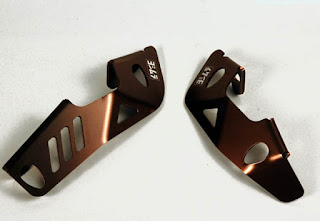 Yoshimura has put out a slew of DRZ400 parts for the supermotarder.
Starting with the Yoshimura Suzuki DRZ400 Case Savers, Yoshimura has created a two part billet kit for protecting your DRZ400's engine cases. These bolt directly to your case using stock hardware. They are anodized in a kind of bronze color.
Next, Yoshimura now offers a Suzukii DRZ400 Engine Plug kit consisting of one large and one small engine plug for your DRZ400. Both are anodized in the same bronze type color.
The Yoshimura Suzuki DRZ400 Axle Blocks are also a new addition to the Yoshimura hard parts line-up. Again anodized in the bronze coloring, these are billet aluminum blocks.
A new DRZ400 Steering Stem Nut, billet aluminum and anodized.
Last on the list so far is the new Yoshimura Suzuki DRZ400 Fender Eliminator. Nevermind that supermoto guys traditionally don't buy fender eliminators, but this kit is actually a short license plate holder and features an LED tail light.
All of these parts are of a very high quality, well machined and light weight. They also bolt on easy and will look trick next to the Yoshimura Full Dual Exhaust System for the DRZ400.
Email Post