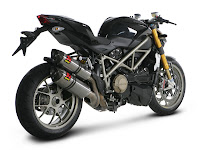 Akrapovic has released a brand new exhaust system for one of the sexiest motorcycles currently available. The Ducati Streetfighter is an exotic beauty. Now Akrapovic has made it possible to upgrade the performance and sound of this amazing motorcycle. 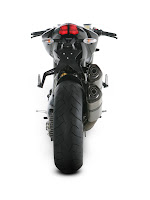 The new Akrapovic Ducati Streetfighter exhaust offers a great balance between price and performance, and represents the first step in the exhaust system tuning process. In addition to performance, the twin hexagonal shaped mufflers with titanium or carbon fiber muffler sleeve adds a

clean racing look. Additionally, the Ducati will put out a much more powerful racing sound. You will also save up to 3.45 kg compared to the stock Ducati exhaust system. In both configurations, mufflers include removable noise dampers.

Akrapovic says "The Akrapovic SLIP-ON open system greatly increases the potential of the big twin cylinder engine. Both power and torque are increased over the entire rpm range, with the greatest increase shown in the middle and top of the range. We measured 147.79 HP at 9929 rpm, while the max. increased power of 4.95 HP was measured at 9850 rpm. That results in a much smoother ride as the biggest gain of power starts from 4500 rpm. 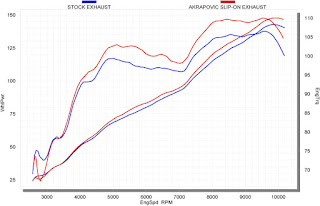