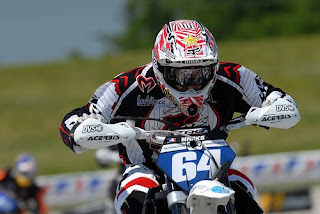 SONOMA, Calif. -- Infineon Raceway will host more than just AMA Pro Road Racing at the Kawasaki Superbike Showdown, presented by Supercuts, May 15-17. There is also a full weekend of Supermoto action slated for the Infineon Raceway Karting Center.

The addition of the XTRM Championship Series will give Infineon Raceway three full days of Supermoto racing at the kart center. Supermoto USA, which has competed during the AMA road-racing weekend each of the last four years in Sonoma, will be featured on Friday and Saturday.

The XTRM event will feature a number of Northern California riders, including Vacaville native Joey Pascarella, who will vie for the Lites championship, as well as recognizable names like Jeff Ward and Mark Burkhart.

This will mark the series’ second visit to the Sonoma Valley — it hosted its national championships at Infineon Raceway in October.

NOTABLE: The weekend will also feature three days of Supermoto racing, with Supermoto USA running on Friday and Saturday, and the AMA Supermoto XTRM Championship Series on Sunday. There will also be SBFreaks Street Freestyle all weekend.