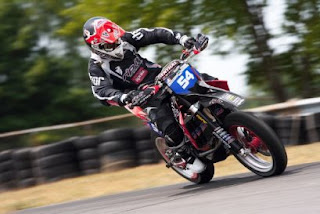 This prestigious event was adorned with over 30,000 die hard race fans over the course of 3 days; many of whom traveled from all corners of Europe to witness the worlds best motorcyclists battle it out on the famed Supermoto course. 370 riders from around Europe gathered here hoping for the chance to race with the worlds most esteemed athletes of their genre, and a grueling back to back series of eliminations decided the few who would be placed on the starting grid.

There were 2 categories formed to make up the 2 finals. The Stars Category was made up of riders from all backgrounds, such as: Stefan Everts, Mickael Pichon, Frederick Bolley, Josh Coppins, Joel Smets, Jeff Ward etc. While the Supermoto category contained Supermoto specialist athletes.

Darryl got off to a 6th place start, and fought his way up to 4th with 10 laps to go. Atkins put in one of his most impressive races to date, and battled relentlessly with 8 time MX World Champion (and local star) Stefan Everts. Atkins and Everts went back and forth into 3rd position which created an enormous uprising of the predominantly Belgian spectator base. Out of control fans often times had to be pulled off the track by security to avoid any disturbance to the combative duo.

The final dirt section gave Everts the last advantage, awarding him 3rd with Atkins inches behind in 4th. The race long struggle had clearly been the highlight of the day judging by the crowds out of control enthusiasm.

“It was an amazing feeling for me to run so closely with this level of racers. I definitely had the speed over Everts on the road, as I passed him several times, but he immediately got me back in the dirt. After giving it such a great shot, it was frustrating to miss the podium by just a few inches. However, the purpose of me accepting to do this event was to gain the speed, strength and fitness needed for me to get the job done at the final round of the AMA Championship. That goal was achieved, and I am 100% ready for the final round.” Noted Atkins after the race.

Benny was gridded on the front row due to his excellent qualifying time. Unfortunately he got a poor start, and came across in 7th for the 1st lap. After fighting his way into 5th, Carlson lost the front end and went down during an attempt to make the pass into 4th position. Quickly, he remounted and finished 7th, which was good enough to put him into the final.

Benny gridded up on the 7th row which didn't allow him to get a great start. After fighting his way up the field to 16th, he was forced to coast over the line due to a technical problem.

“It was a shame I dropped it in the semi, as it didn't allow me a good start position for the final. With that aside, it was a great experience being here and I’m very thankful for having this opportunity. This experience is helping me mentally for the US events, and I really look forward to racing the final AMA round in a few weeks.”

A special Thank you to Freddy Tacheny, the promoter for the Superbiker event - also, Oliver from Quick Motor Specialties in Gent, Belgium for his support with the bike. As always, we would like to thank the team sponsors: