“We are very excited about the upcoming 2008 season,” said Tim Shea, owner and team rider. ”Everything is coming together for our team. Thanks to Darren and Geoff at DNA 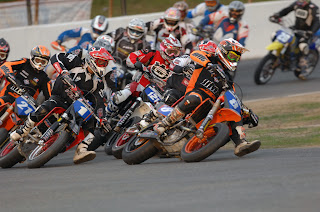 Energy Drink for their major support, and also a big thanks to Bryan Peckinpaugh of MotoPR. His firm has been working non-stop to help build our team.”

The three team riders take their motocross talents to the AMA Supermoto Series. Shea won his class at the 2007 White Brothers Amateur Vet World Championships in Texas. Bordelon raced the Texas round of the AMA Supermoto Series last year as a Pro Am with lap times on par with the AMA Supermoto premier class. Ingle raced the infamous Pikes Peak International Hill Climb, finishing sixth in the 450cc motorcycle class in 2007. The team’s goal is to have all three riders in the top ten in the Lites class this season. It has purchased a 40-foot transporter that provides exposure for sponsors and will serve as team headquarters during the race weekends.

Partnering with DNA Energy Drink, the Houston, Texas-based Shea Supermoto Racing will have fan promotions at every round leading up to a final race drawing that includes a pit bike outfitted with team graphics as the grand prize. More information on the team can be found at www.sheasupermoto.com.

MotoPR is providing the team with the structure and expertise to have an integrated public relations and marketing effort to market sponsorships and provide publicity for team members and sponsors.

MotoPR’s Peckinpaugh added, “Tim Shea and Team DNA Energy Drink/Shea Supermoto Racing are making a major effort to participate in AMA Supermoto, especially as a first-year team. We are thrilled to be working with them.”

Team DNA Energy Drink/Shea Supermoto Racing has race and practice bike, presenting, and associate sponsorships available. You can learn more about the team and available sponsorships by contacting Bryan Peckinpaugh with MotoPR at (313) 575-1245 or bryan@motopr.com.

Detroit, Michigan-based Moto Public Relations (MotoPR) is a public relations and marketing firm concentrating on the motorcycle arena of action sports. Its priority is to create great interest by the corporate and mass media sector in motorcycle racing while providing athletes, teams and other properties the tools to maximize appeal. Services include branding, public relations programming, sponsorship acquisition and management, media relations, media training, promotion development, event management, and advertising. To learn more about its services, visit www.motopr.com.
Email Post