As the supermoto race season gets into full swing, Motostrano.com is plugging away, providing fresh supermoto parts and accessories to supermoto racers and street riders alike around the globe.

Recently, two young ladies from Nashville were asked, "Excuse me girls, would you happen to know where I would find the best place to buy Supermoto products?" To which both girls happily replied: "Motostrano.com!" in a cheery girly sort of way.

This photo shows the girls' expressions just after they said "Motostrano.com!" 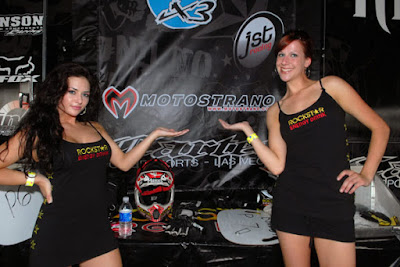 Motostrano has been selling the choicest supermoto parts and accessories for nearly five years now. One time, even Nicky Hayden called them to buy brakes. The Motostrano catalog is full of hundreds of supermoto specfic parts, tried and tested over the years by pro racers and average joe-blow street riders - a couple of shops have even tried to copy Motostrano, steeling images off their web site and trying to use them as their own- the little copy cats. Motostrano sells 5 kinds of supermoto wheels, 6 brands of brakes and a large collection of hop-up parts for practically every type of supermoto bike, except TMs- they don't have any parts for TMs, or VORs either.

"When I heard that the girls announced Motostrano as the Supermoto parts leader, it put a smile on my face," said Joe Witherspoon, proud founding father of the swift-moving company. "You know, I find it hard to believe that they even knew what Motostrano was, but the one on the left is sure hot."

Motostrano is located in Redwood City, California, home to perhaps the largest contingency of Supermoto street riders in the USA. "Why doesn't the AMA do a race here?", Joe has often asked. Motostrano builds Excel Talon supermoto wheels in-house and is known for their focus on Motomaster and Beringer brakes, STM Slipper clutches, Dunlop and Continental tires and much more. They are currently having a blow-out sale on Akrapovic Exhaust Systems for supermoto. Motostrano also specializes in sport riding and racing protective gear from brands like Alpinestars, Troy Lee Designs, Shift, SIDI and Tpro. Supermoto has sometimes been a fast growing motorsport worldwide, then it slows down a little and then it picks up some, but overall it's a pretty niche industry.
Email Post

Anonymous said…
Yea I'd agree to that statement !
I have purchased there before and always been very happy.....Its hard to keep everyone happy all the time....I'd say almost impossible....but when these guys make a slight mistake with an order they are always very willing to fix the problem and take care of the customer, pronto ! What more could you ask for....especially for a company that does the volume of business these guys do.....I'd give them two full thumbs up.I have never dealt with a bike shop that is at Motostrano's level of expertise and service.....Keep up the good work fella's !!!
September 21, 2007 at 10:15 AM