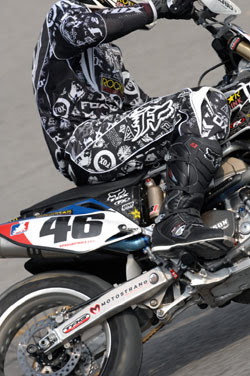 With its unique layout and banked corners, no one can deny that the Nashville track is the one of the fastest and toughest tracks in the Championships scheduled this year! The track was a quick one, with concrete walls on its high banks clearly playing to the strengths of those with a background in flat track. Our riders adapted quickly. Using the banks to gain maximum speed and deftly avoiding the impact points which caused a few hard crashes during the weekend event.

All Access Racing and Motostrano.com/JSTRacing sponsored rider Mickey Dymond didn’t have good fortune during his qualifier. Dymond, The winner of the last AMA Supermoto event, already riding on his backup bike, got into a high speed impact crash with Ben Carlson of the Aprilia team during the 2nd lap of the heat race. This left both bikes damaged, too damaged to compete. The heat race was red-flagged and luckily, the Rockstar/Hart & Huntington team was allowed to loan Carey Hart’s backup bike to Mickey. A quick change here and there and Mickey was allowed to run a motorcycle that enabled him to finish 7th in the heat race and 8th in the final event, enough to salvage valuable points toward the championship.

A big THANK YOU to Carey and the Hart and Huntington crew, and all who were involved in getting Mickey back on track. Congratulations Mickey!!

Back to the 450 Premiere class; despite the long weekend and working around the unusual setup for this track, Carey Hart is creeping up in points in the 450 class and had a great race on Saturday. He qualified the heat race without any issues, getting a feel for the track and getting his lines through the corners down, finishing in 8th place. During the main event, Carey pushed hard as he moved confidently up the grid to bring an 11th place finish to the team and stepped up his position in the Championship to 14th place. He’s looking forward to the remainder of the season and some more technical tracks.

In the Unlimited class, Travis Marks and Doni Wanat did well, bringing a 6th and 12th place respectively to the team.

Travis had to switch to his back-up bike during the mid-day practice session due to engine problems with his primary bike The race went on, despite being scored an entire lap down because of an AMA transponder malfunction. After filing a protest 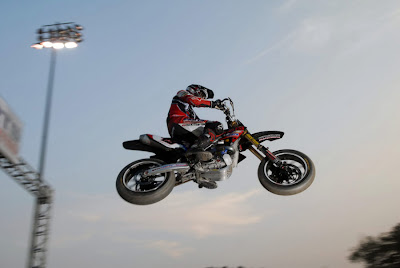 challenging the posted results, the final result was corrected and a well deserved 6th place was rewarded to Marks. Travis not only moved up in the Championship to 6th place, he is now only 13 points away from 3rd overall in the unlimited championship.

Keeping a close eye on the temperature Doni didn’t have any problems during the race, although he did express a dislike for the treacherous track. Showing determination and consistency he maintained his 9th place in the series. Doni’s looking forward to the next four races to move up in points and score better results for the team and combined Team Championship.

See you at our next race, September 29th in Redmond, Oregon. Come on out and meet the team!

We would like to thank our sponsors for all their support, especially;

Motostrano.com is the leading supermoto parts and accessories company in the USA. Motostrano offers complete supermoto conversion kits for race and street duty, custom wheels, Moto-master brakes and more all for supermoto. To learn more about our services please visit www.motostrano.com.
Email Post