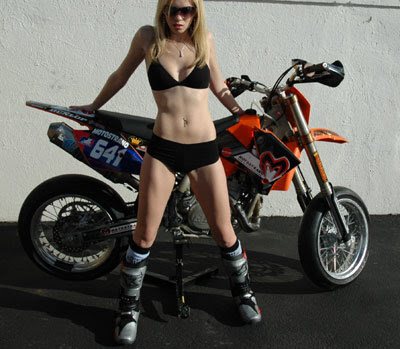 Hey.... over here...: One of the most common questions amongst supermoto racers and die hard supermotard street riders. What boots?

If you're a street rider, you know full well if some one made a specialized type of underwear and named them with a "SM" in front of it, you'd be sporting your S-Moto Boxer Briefs every time you swung a leg over. Same generally goes for Boots, but boots, like boxers I suppose, are all not made equal.

The basic demands for a true Supermoto Boot are the following:

A few manufacturers have tried to tackle the problem in various ways and not all of them have really done much to supply the Supermoto rider with a real reason for buying into the Supermoto boot domain.

The distinguishing factor of an SM boot vs. any other motorcycle boot is the attempt to make the sole of the boot more capable of sliding on asphalt vs. dirt- Virtually every Supermoto boot out there is an adapted MX boot with some type of replaceable and slidable sole system. No boot maker has made a ground-up Supermoto boot and so the person in the market for an SM boot really also has to consider that there is a full range of MX boot technology out there and it really ranges from crap on one side to over engineered art on the other.

One thing to consider is that you can build a boot with replaceable sliders and that solves one minor problem, but in Supermoto the entire boot takes such a beating that in the end sliders really don't help offset the cost factor of sliders vs. resoling or a new boot.

In 2009, Alpinestars finally released their entry to the Supermoto Boot world. We

Gaerne has been making a Supermoto Boot for many years. Uses a Vibram sole. Great boot.

Sidi Boots. One of the most popular "SM" boot in use would be the Sidi model. Sidi does a great job of satisfying all of the

above criteria, except perhaps the price category. At $500, that's a lot of boot that is going to get ground down, slapped on the asphalt and run over. The replaceable slider design of the Sidi is good and readily available. Sliders are relatively inexpensive and the factor of good ankle, toe and shin protection is all there. For most folks though the price is just too much boot to melt on the pavement.

The other players include Oxtar, AXO (which is really no longer made), a few others- even Fly Racing had a kind of Supermoto boot on the market.

By far the most dominant actual Boot used in Supermoto today would have to be the Alpinestars Tech 8. Look at any starting grid and that's the boot you'll see on the track most. Not an SM boot at all and there's not even an after market slider system available, the Tech 8's been the dominant boot in motocross for quite some time. The Tech 8 is reasonably priced and it protects your feet, period. Plus, for not much more than the cost of most slider systems, every Tech 8 boot sole is resolable. Same goes for the Tech 10, as well as the 3 and 7.

A few notable racers and a lot of street riders go with sportbike boots. A lot more comfortable, light weight and offering great feel of the controls, Sportbike boots just don't cut it in terms of the specific kind of protection needed for supermoto. Sportbike boots aren't designed for riding with a leg out and off the bike and they're not designed for the sharp pegs on an MX bike. They'll work and they'll protect to a degree, but only MX boots provide the kind of protection to the whole foot and bones inside - a real foot brace - where a sportbike boot is more designed for a high speed impact and slide scenario.

Update: We blogged about the Alpinestars Supermoto boot recently which are available NOW.
Email Post

Anonymous said…
You forgot one very, very good pair of supermoto boots taht offer all of the above. I know, I wear them :-)

motostrano said…
eh, actually, not forgotten. intentionally left out. there are a few other brands of supermoto boots out there, but these are the ones we recommend. through personal and customer experience with the oxtar/tcx brand and boots, our opinion of them isn't very high as far as actual protection goes.
JW
January 22, 2008 at 11:58 PM

Anonymous said…
I love the fit of the Gaerne Supermoto boot, but the quality control is sub par. The first time I used them half of the screws fell out. I went to loctite the remaining screws only to find out the inserts are rotating or stripped. I haven't looked into it to find out which yet as I was too disgusted with my new $300 boots...
March 5, 2008 at 1:15 PM

Anonymous said…
i use the sidi crossfires srs, and i have to say that yes they are a little more money, but you get what you pay for. quality and durability are outstanding and the best part is that 90% of the boot is replaceable.
March 19, 2008 at 12:04 PM

motostrano said…
Alpinestars has released their Supermoto Tech 7 boots and we blogged about them here: