Troy Lee Makes It A Double 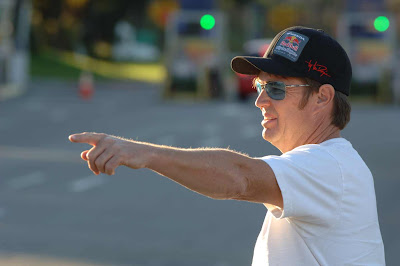 August 16, 2007 - Corona, CA - For the second consecutive year, Troy Lee Designs will stage the AMA pro Supermoto finale in Southern California. But this year, they're going to "make it a double" - a double-header that is, with the 9th qualifying round of the series taking place on Saturday, November 10, 2007 and the finale occurring the following day on Sunday, November 11th. This year the venue will move away from the ocean to a new location in the greater Los Angeles region to be formally announced next week.

To great reviews, TLD hosted the 2006 AMA season championship final - "Troy Lee's Duel at the Docks" - at the Queen Mary in Long Beach. But for 2007 the Fall event moves to an exciting new venue.

"Months ago we considered returning to the Queen Mary but they're in flux now and we would be unable to produce a quality event like we did last year," said Lee. "The ship's up for auction and looking for new ownership. When that happens my team and I will be happy to discuss another event. Until then we've pursued a new venue that our racers, sponsors, and fans will really enjoy."


Troy Lee
Troy Lee scopes out an all new track design for his November supermoto weekend. - Scott Cox photo
"We're on great terms with the City of Long Beach and look forward to producing another race there in the future," offered Troy Lee Designs GM Bob Weber. "One of the best aspects of supermoto racing is that it's moldable and you can be creative, depending on the location. And the group we're finalizing details with right now enables us to put together the best supermoto double-header race weekend ever. It will be amazing!"

And of course, courtesy of one of the motorsports industry's most creative minds, Troy Lee and his world-class event production team, supermoto racers and fans can expect another innovative track design and spectacular event."

"It will definitely be a weekend of awesome entertainment," said Lee. "Next week we plan to reveal the fantastic venue we're working with and as our plans unfold we will be announcing a few additional surprises that the racers and fans will love."

As was the case for last year's final weekend, a core group of sponsors have lined up quickly to support the racing event including Honda, Red Bull, Parts Unlimited, Weekened Warrior, Oakley, PPG, Mattel Hotwheels, and the motorcycle world's official beer, MotoBrew.

"We had a great experience producing and promoting the Queen Mary event last year," said Lee, whose custom-painted racing helmets have been worn by the world's fastest racers for over 27 years, and who is a supermoto team owner and racer himself. "We learned a few things that will help us put on an even better show and continue to support the exciting and fast-growing sport of supermoto."

Extensive event details can be found at www.troyleedesigns.com.