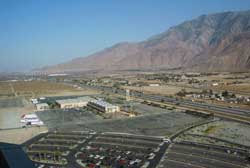 Located along Highway 10 in Cabazon, California between Riverside and Palm Springs, motorcycle friendly Morongo has welcomed the November supermoto event with open arms, as well as plenty of open space to accommodate another of the inventive racetrack layouts that has become a signature of Troy Lee's events.

The Morongo Resort ( www.morongo.com) is one of the original California tribal gaming faciliti es and after undergoing a massive $250 million upgrade in 2004, was transformed into an award-winning 4-Diamond destination resort. The property boasts 310 deluxe rooms and suites, many with spectacular mountain vistas and canyon views, and a bevy of fine restaurants and nightclubs that will delight racers, teams and fans alike when they aren't out at the track enjoying the bar-to-bar supermoto action.

"We are very excited to be hosting the 2007 AMA Supermoto final round and Championship here," commented Michael Potts, Morongo's Director of Sales. "As the gateway to the desert, plenty of motorcycle riders and fans already know about our facility, but now we'll have the opportunity to really show supermoto racers and their fans a great time this November. We're looking forward to it!"

"We're extremely excited about bringing supermoto to an awesome world-class facility like Morongo and working closely with the Morongo staff and management. So far they have been great to deal with," said Bob Weber, GM of Troy Lee Designs. "Fortunately, there's lots of room to stage a championship racing event here because like last year, Troy is looking to blow this thing up in huge fashion with all the special features and activities now planned."

"I have to agree with Bob," said Troy Lee. "Morongo is the perfect venue for our 2007 event and I can't wait to get started. We set the bar high last year in Long Beach but we'll be pulling out all the stops come November."

The ninth and final round of the 2007 AMA Pro Supermoto series will take place on Saturday, November 10, 2007, with the championship final occurring the next day on Sunday, November 11th. Preceding the weekend pro doubleheader, a promoter practice will kick things off on Thursday, November 8th, with a complete amateur race day on Friday, November 9th.

Extensive event details and schedules will be found at www.troyleedesigns.com early next week. Information on all aspects of this event will be flowing steadily soon, so please pay attention to the TLD website and the motorcycle press during the coming weeks.
Email Post