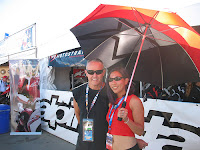 MotoGP at Laguna came and went, fast. What a great weekend: great racing, great weather, food, beer and people. A huge shout out to SCRAMP for ensuring that every one had a smooth and safe event as far the spectators go. Each year those folks get torn in a million directions as they try to please every one and get everything done in just a few days. The traffic seemed to go smooth and it sure helped that the weather was nothing like the 100+ temps of the 2006 GP.

A huge thanks to Markus

and Donny from Alpinestars, as well as Leanard and AJ at AGV Helmets. These guys helped out our staff to no end putting hours and energy working directly with customers with product questions and sales. Without them we would have been so short staffed for this, it would have been unbearable. Thanks also to Scott Link and Gabriele Mazzarolo from Alpinestars and JH from AGV for working closely with us to make this happen.

For Motostrano- this was a special event. Each year we go and typically set up a

20x20 booth and cram as much product into one little space as possible. It gets hot, sweaty and crammed. This year our goal was to bring about the same amount of product as previous years, but inside double the booth space. It worked out great. With some help from our partners- Alpinestars and AGV Helmets we were able to have a more spread out shopping experience for MotoGP fans. From what we could see and what others were telling us, Motostrano had the most booth traffic at the event.

We brought about 30 leather suits, 60 jackets and a whole lot of gloves and footwear. On top of that we had a corner sectioned off just for AGV Helmets. The Rossi Replica

lids were flowin' like spring water. The weekend is made that much easier on us as a vendor when we're selling products that people actually crave. For people coming from all parts of the globe, our booth is about the only place they can check out some these products, let alone buy them. Due to Motostrano's huge inventory, we heard so many folks saying "I've been looking all over for these".

This was also the first year we had to actually practice a little crowd control in the booth. The first day of the event we, I should say, former Motostrano employee Zoe Rem, spotted some mutherf&%ker slipping some Alpinestars GP Pro gloves in his backpack and that pretty much put us on Homeland Security Red Alert for the rest of the weekend - thanks, dick. So, when the booth got slammed, the entrance shut down. This ended up being kind of cool, as it created a line out the entrance and gave our booth a little bit of exclusivity. It also just made it more livable for every one inside.

On the AGV side, we had the most rare and limited AGV Rossi helmets available today

on hand ready to buy. For Rossi fans, our booth was the spot. 6 kinds of limited Rossi helmets to buy and collect.

At the end of the day, our crew got to unwind at our rented house in Seaside, just

outside downtown Monterrey. Each year, accommodations are a major problem for anyone going to the races, so we try to get our crew into one rented house for the weekend. This year was the first time we stayed so close to the track. Our place had a great view of the Monterrey Bay and an awesome backyard to enjoy it with.

I have to thank our staff: Paul Giani (Commander Paul for the weekend), Joe E, Jimmy James McCarthy, Aliya, Linda, Crystal and Mr. Tai for all the sweat equity invested this weekend. And of course, thanks to me. Thank you me.

Each year we tend to offer customers a new deal for their experience of Motostrano and Alpinestars at MotoGP. Plans for next year are already in the works. We hope to see you there!