We had the great opportunity to see this suit 5 months ago before it was out. What a suit. Like we said, it got a complete redesign, as well as a complete price increase thanks to the all weakening dollar and general economic malaise.


Every now and then a product is introduced to market that changes the paradigm, goes a little further than the rest, or just plain out paces the competition. The Alpinestars Race Replica Leather Suit is one of 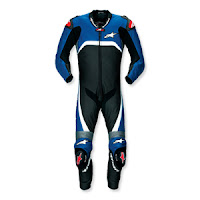 those products. Introduced three years ago to the US Market, the Race Rep Suit had been available in Europe for a year before that and before that time Alpinestars Race Development group had built the suits for their pro sponsored racers like Nicky Hayden and others.

To the layman or budget minded rider, the surface of this suit looks like any other. We're often asked what's the difference between the Alpinestars Race Replica and any other suit out there. What makes this item so special?

The Race Rep suit is hand made at one of Alpinestars' more technical manufacturing plants in Romania, unlike other models in the Alpinestars' suit line-up, most of

which are manufactured in China. Each suit takes 1-2 days manual labor to construct and the amount of stitching and subtle details put into the suit are what boosts the retail price ($1899.00) of this item to consumers.

The Race Replica Suit is made of higher end and more subtle 1.2-1.4 mm leather than other suits in their range. Along with that, the Race Rep has more accordion stretch leather panels than any other suit we've seen on the market. This leather alone is very expensive to make right, ie. maintain its form with use and keep its thickness. The Race Rep suit is built to fit a rider in the 90 degree riders position, where other suits 75 degree and more vertical. This is a serious performance oriented race and track day suit that doesn't feel all that comfortable when you're off the bike. Legs and Arms are pre-bent. 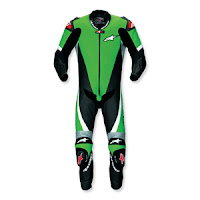 The Race Replica is available in 4 different colors: Silver, Blue, Red, Green. We have to commend Alpinestars for offering this suit in Kawi green. That's one color you're going to be committed to.

One of the more unique features of the Race Replica is the schema of the race speed hump. Unlike any other leather race suit we know of, all of which use simple foam to keep the hump's structure, the speed hump on the Race Rep has air ducts that at speed will channel air down the riders back and legs - a huge plus if you happen to be a professional MOTO GP racer racing some where in the desert - and just as useful if

you're a budding track day enthusiast on a hot humid day at Thunderhill. If you have watched recent MotoGP footage from the paddock, you may have seen the specially designed cooling system that mounts to the top of this speed hump that is designed to keep the rider cool when not on the bike waiting for the next race. Additionally, Alpinestars has designed an internal cooling unit for their pro riders that mounts in the hump as an internal fan. This same hump is being used by Alpinestars Safety Development team for their new AST Project which reads impact levels, acceleration and other data.

The suit comes with it's own Level 2 back protector. The Alpinstars Tech Race Back Protector is Alpinestars full race spine protector.

The Alpinestars Race Replica leather suit is also fully perforated, all along the torso and then down on to the legs, providing even more cooling features over other suits in the Alpinestars line-up.

On my recent trip that involved a stop at the Alpinestars Factory, I was able to get a glimpse of the 2008 version of the Race Replica

suit. As with all things Alpinestars, their stuff is made so well, it's always hard to decide what's better the original product or the new and improved. The 2008 Race Replica suit looks to me to be paying homage to the expected domination of Alpinestars/Ducati MOTOGP Rider Casey Stoner. Great looking suit, smoother design to it. Same if not better features as the original Race Replica suit. This suit should be available in the USA in the Spring of 2008 if not late fall 2007.

When it comes right down to it, if you can afford it, or even if you can't, why not go with the best?
Email Post
Labels: alpinestars leather suit motogp