These days, just about every supermoto track whether amateur or pro requires some kind of supermoto catch can to be mounted to the bike when out on the track. If your track doesn't, it really should. Your off-road bike has fluid run-off and overflow tubes that run out and drip from the bike. In the dirt, there's not much of a hazard concern. On supermoto pavement that fluid can cause a crash and/or a fire and we've seen more than one crash and fireball caused by no or improper installation of a fluid catch device on the track. Little can ruin your race day more than having your bike or you catch on fire. A suitable catch can system is among the top 10 things on your supermoto parts list.

There are 3 readily available commercial catch cans on the market today for supermoto bikes. I should say that there are 4, but we're excluding the home-made Redbull or Rockstar can.

The first catch system that hit the market that we know of is the Supermoto Engineering Catch Can. Not really a can at all, the SME Catch system incorporates an aluminum anodized 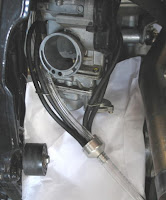 canister with 4 to 5 holes where your carb and other lines are secured. The part can then be mounted to your bike or left hanging. A larger reservoir tube extends out the other end of the canister and is often mounted to your swing arm or subframe.

UFO Plastics have had what they call a "hydraulic reservoir" on the market in Europe for a few years. The UFO Catch Can is made of plastic and mounts to the front your engine cage, out of the way and clean. 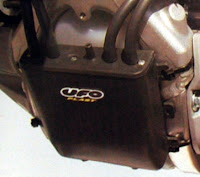 Graves Motorsports recently created their own version of the Supermoto Catch Can in an all aluminum system with a large reservoir that tucks in behind the carberator.

Graves tends to make parts made specifically for Yamahas, but this kit will mount to other brands of bikes as well.

All of these systems work well. The Supermoto Engineering Catch Can is probably th emost flexible and compact though some riders complain that the reservoir tube can be a little on the small side. Any of these systems will fill up after one race, so you'll need to empty them frequently or they'll leak.

All of these systems are available and in stock at Motostrano.com.
Email Post
Labels: catch can engine parts supermotoo parts

Anonymous said…
A bit of information regarding the Supermoto catch cans.
If you have aftermarket carb vent lines... the thicker wall, less flexable kind, and you buy a 5 hole catch can, the hoses won't fit.

The holes in the catch can are sized for the OEM hoses and there isn't enough space on the 5 hole can to enlarge the holes for the thicker wall hoses.
I don't know about the cans with fewer holes... there may or may not be adequate room.

This isn't so much an error or omission on the part of Motostrano, but rather a logical way of doing it. The majority of bikes out there have OEM hoses.

I decided to keep my catch can... I'll use it on something sooner or later, but if your hoses are the aftermarket type... consider another can.