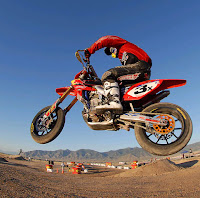 Jeff Ward continues to defy the odds. Common knowledge would say that a racer of 45 would not be on the top of his game still winning championships against riders half his age. Yet as the 2007 AMA Supermoto Championship season approaches, Ward, the defending and two-time champ with Team Troy Lee Design Honda Red Bull, is still considered the rider to beat despite the fact that he will turn 46 in June.

Ward heads the list of top riders expected to make a run for this year’s premier class, the AMA Red Bull Supermoto. The series kicks off on May 19 at the Verizon Wireless Amphitheater in St. Louis and concludes on Nov. 11, with the Duel at the Docks in Long Beach.

Ward, who won his first Supermoto title in 2004, earned back the title last year over Doug Henry of Graves Yamaha by a margin of 36 points (429-393). Ward lost the 2005 title in the final round to Jurgen Kunzel. Chris Fillmore finished 2006 ranked third with 356 points. Fillmore will ride for Monster Energy/Litz Racing/Kawasaki in 2007.

2006 will be a year Ward won’t soon forget. In August last year he became the oldest male gold medalist in X Games history when he won the Moto X event. After that Ward was inducted into the Motorsports Hall of Fame. His AMA Supermoto title was icing on the cake.

“Motocross has been my life and it’s always going to be my life, and Supermoto is a part of it now too, helping it grow,” Ward said after winning the title last year in Long Beach. “My oldest son (Brandon) runs it well and he might be able to have a career over here if it takes off big enough. And my other son (Ayrton) wants to go road racing and this is a perfect venue to start that with small bikes and the pavement. It’s a good sport and I want to see it get bigger and bigger.”

Ward’s Troy Lee Designs teammate Cassidy Anderson, who won last year’s AMA Supermoto Lites title, will step up and join Ward in the premier Supermoto class. Anderson, of Provo, Utah, had an outstanding 2006 in Supermoto Lites. He won seven of the 10 rounds, opening the season with five-straight wins. He built a large lead in the series halfway through the year and held it to the final race. He will now face Ward and the rest of the Supermoto regulars head to head for the first time.

Mark Burkhart will uphold Yamaha honors in Supermoto with the Graves Yamaha squad. Burkhart has been a leading competitor in the class and he’s hoping to find the consistency that will bring him a championship. The Ohioan was the Lites champion in 2005.

HMC KTM will be a powerful squad again this year in the Supermoto class with British rider Kurt Nicoll and Australian up-and-comer Troy Herfoss.

Ben Carlson won the AMA Supermoto Unlimited Championship last year and now joins Factory Aprilia Rip It Racing’s Darryl Atkins riding the twin-cylinder Aprilia SXV. This year marks the first season the high-tech Aprilia 450cc V-Twin will be allowed to race in the Supermoto class and Carlson and Atkins should be factors, especially on tracks that feature bigger road racing sections. The duo will race Aprilia 550s in the AMA Supermoto Unlimited class as well.

David Baffeleuf will run under the LA Fuel GP Husqvarna banner. Micky Dymond is back riding for All Access Honda. Cary Hart and Tyler Evans have teamed up to form the all new Team Rockstar Hart & Huntington Tattoo Co., along with other premier class top riders including Steve Drew and Mike Metzger.

Sadly, there will be a big hole in the starting grids of this year’s races. Multi-time AMA Champion Doug Henry will not race due to serious injuries suffered in a Supermoto accident on March 4, during Daytona Bike Week activities. Henry is one of the premier stars of the series and his presence on the track will be sorely missed.

The AMA Hot Wheels Supermoto Lites class promises to be wide open this year with last year’s runner up Brandon Currie the pre-season favorite back with the Graves Yamaha team. David Pingree impressed everyone with his Lites victory in Long Beach last year and it earned him a coveted ride with Team Troy Lee Designs Honda Red Bull, where he’ll ride alongside team owner Troy Lee. Dalton Dimick and Matt Abbott will race for the newly formed Monster Energy/Litz Racing/Kawasaki team.

Ben Carlson will be back defending his AMA PPG Supermoto Unlimited presented by M&R Products No. 1 plate, but this year riding a twin-cylinder Aprilia. “I’m looking forward to riding with Aprilia,” said Carlson. “I’m sure there’s going to be some great competition in the class.”

Team HMC KTM will be a powerhouse in AMA Supermoto Unlimited class with Troy Herfoss, Kurt Nicoll and young gun John Lewis. Gary Trachy and David Baffeleuf are slated to run the big bikes for Husqvarna.

The Verizon Wireless Amphitheater in St. Louis will host the AMA Supermoto Championship season opener on May 19. For more information visit www.stlouissupermoto.com.