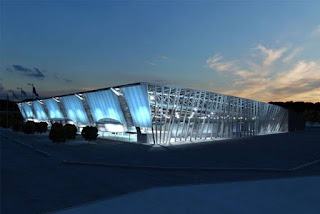 The second Grand Prix of the FIM SuperMoto World Championship promises to be one to remember as the kings of slide take it into the night as the championship hosts it's first ever night time round. By: Garry Morrow

The Oval Lingotto in Torino, which hosted ice-skating in the Olympic Winter Games in 2006, will host the ground breaking round on May 26 and is sure to expose Supermoto to a much larger and wider demographic with the Oval Lingotto being only 500 metres away from Torino’s city centre.

The circuit will be more than 1200 metre long, including a 300 metre long off road section, that will be a key factor in the result of the race. The average width will be 8 metres. The top class facilities will include a restaurant, and three bars.

SuperMoto will be the main show of this event, but the organisers have found some room also for some Motocross and Quad Freestyle shows. Top freestylers will try their best tricks, such as the amazing back-flip, to show the crowd what they are made of.

"This is fantastic news for the FIM SuperMoto World Championship," CMS/FIM President Dr. Wolfgang Srb enthused. "For the first time there will be a night event. The location, right in the centre of Torino, adds an additional value for the fans. I am very grateful to all the partners who made this happen.”

"Finally our dream of bringing SuperMoto to city centres and to prestigious venues is coming true; SuperMoto is a city bike, and must be raced in cities," said Youthstream President Giuseppe Luongo. "I am sure the thousands of fans coming to this edition will experience a magic moment in a fantastic atmosphere, 100% adrenaline. We believe the Grand Prix of Italy will be an absolute success, and we would like to thank Giorgio Foi and Danilo Boccadolce for their organization.”