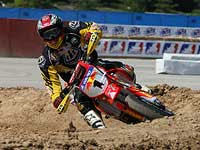 Just as with any new season, the 2007 AMA Supermoto opener at the Verizon Wireless Amphitheater in St. Louis, MO introduced the world to some new faces, was missing some familiar names no longer on the gird, and saw a number of established talents breaking in new liveries after switching seats during the offseason. However, no matter how much had changed, there was one very obvious constant: Troy Lee Designs Honda's Jeff Ward.

The two-time and defending series champion proved ageless once again, scoring an impressive victory in the '07 season kick-off after a spirited battle with Frenchman Adrien Chareyre, an imposing talent currently ranked second in the World Supermoto Championship.

Ward, 45, started the main event from second on the grid, lining up between polesitter Mark Burkhart on the Graves Yamaha YZ450F and Chareyre's Husqvarna. However, all three were forced to duck in behind Ward's former teammate, Monster Energy Kawasaki's Chris Fillmore, who stole the holeshot from the outside of Row 1 at the green light.

Chareyre, whose only previous AMA Supermoto experience was a pair of fourths claimed last year at Road America, quickly took control of the race, moving into first on the second lap and holding the position deep into the race. Ward finally found a way past on lap 12 of 15 and managed to maintain the spot to the checkered flag despite heavy pressure from the international star.

Afterwards Ward commented, "St Louis's track was fast, I had to be aggressive out there. Everything worked out great; I really liked the dirt section and was able to make up time in it. It feels great to get the first win of the season."

Ward's teammate, 2006 Lites champ Cassidy Anderson, picked up an impressive third to round out the podium, finishing ahead of Burkhart and Fillmore.

"I feel really good," Anderson remarked. "I struggled in practice, but I was able to put in a solid effort in the main event. I am racing the Supermoto class this year because I want to run with these fast guys. I could have defended my Lites title, but I think I'll progress as a better rider racing these guys in this class."

In the Lites race, Team TLD's newest member David Pingree did his best to hold off pre-season favorite and 2006 runner-up Brandon Currie for much of the race. Pingree stormed into the lead from the pole and held firm in the position until making a costly error in the dirt section with just two laps remaining, allowing Currie to dart past and steal the checkered flag.

A disappointed Pingree remarked after coming home second, "Everything was going great. I felt comfortable on the track and everything, but I made a mistake going into the dirt section and threw away the lead, and had to play catch up."

Congratulations to the entire team and all of our sponsors on a great opening round!

Round Two of the series will take place in two weeks time at Raceway Park in Englishtown, NJ. For more information visit: www.amasupermoto.com.
Email Post