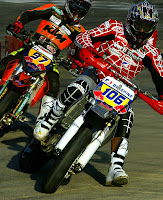 2005 Supermoto World Champion Gerald Delepine made the most of the break between the opening World Championship race at Castelletto di Branduzzo and the second one in Torino, on May 26.

There was almost one free month, and the 37 year old Belgian born in Hermalle invested that much time in his family.

He flew to Las Vegas (USA) last week, and finally got married with his girlfriend –now wife- Laetitia. The couple will fly back to Europe soon, to enjoy their two kids: Oceane and Alan.

But the just married Delepine has not much time for a honeymoon, as he needs to show up in Italy by next week.

The FIM Supermoto Grand Prix of Italy is already in Spiderman’s sights, as the Husqvarna factory rider in the S2 class hopes to improve his current second place in the Championship.

It will be surely an interesting GP on Saturday night.
Email Post