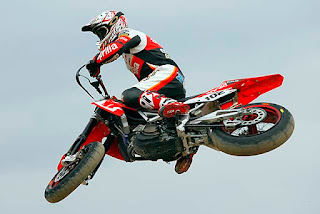 In the first leg of the Italian Supermoto Championships, Christian Iddon earned an S2 podium after finishing 3rd and 2nd in each respective heat. Jerome Giraudo also performed well in the S1, placing 3rd and 6th in both heats and climbing atop the third-place podium. Van Den Bosch, after his withdrawal following a fall in Race 1, finished 3rd in the final heat. The 30 other Aprilia twins in the Italian Championships and Coppa Italia also did well.

The first race of the Supermoto season was a battle against the wind, cold, and rain that fell heavily all day Sunday. A true gamble on the extremely slippery track that forced even those who specialize in such conditions to work hard to maintain control of their bikes. Especially on the dirt stretch of the track that was reduced to a swamp. Yet the extreme conditions didn’t stop Team Aprilia from bringing home important results in the race that took place on the splendid “Daniel Bonara” circuit of Franciacorta.
This Sunday, the best among the official Aprilia captains was the young English rider, Christian Iddon, atop an Aprilia SXV 5.5. He finished in 2nd place overall in the S2 class after coming in 3rd in the first heat and 2nd in the second.
It was a typical race for Jerome Giraudo (Aprilia SXV 4.5) in the S1 class. The Frenchman rode very well, doing his best to control Race 1 in which he finished 3rd. In the final heat, he finished in 6th which was good enough for the day’s third-highest podium.
A decisively unfortunate first heat for the current world-champion in the S1, Thierry Van Den Bosch, as he was forced to withdraw after ending up on the ground due to contact with a competitor. VDB immediately took off again in Race 2 where he battled like a lion to finish in 3rd place.
Also good performances from the 30 Aprilia twins that took part in the seasonal trial; six in the S1 Italian Championships, ten in the S2, and fourteen in the Coppa Italia.
The next engagement of the Italian Supermoto Championships will be on April 22nd in Latina.